Trail running is much different than the roads. With more adventure, obstacles and so much green, you feel like part of nature letting you run through its beauty. There is also the thrill of getting muddy and overcoming streams, tree roots and slippery rocks and coming out safely, with a little blood or a couple of scratches. Trails are simply a different set of elements, which I have added within my love of running.

The Dances with Dirt (http://dwd.runningfitsites.com) Gnaw Bone Extreme Trail Half Marathon was an awesome event from start to finish. Upon signing up, I had no clue where to set my expectations. I received and read the Waiver, which all runners are required to sign, which was the first time I had ever read a waiver for a race. Honestly, the mention of broken bones and death made me think. In conversation with Derek at Blue Mile of Louisville, I made mention. His response: "You mean the death waiver?!" While this made me laugh, Derek did make me feel much more at ease about the race. Once that obstacle was overcome, I was confident and ready for race day.

Days leading up to the race made for fun conditions with a lot of rain and low temperatures. This meant  sloppy and muddy conditions - my favorite! Race day temperature was a prime 44 degrees and overcast.

Before the start of the race, the announcer described mile two as the "shittiest mile of the race." This set the tone for my race - get through mile two and the rest would be smooth sailing. After a few more announcements, we set off into the woods of Brown County State Park. here is how my race went: 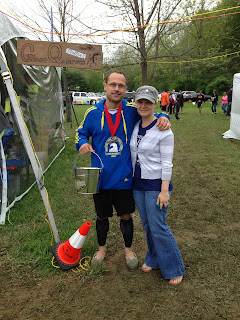 While I can break my road races down into sections for mental purposes, trail runs are much tougher. My approach to trails is to break the race down by major inclines. Gnaw Bone had three. The major climb was at the beginning. When the race started, runner were lead up a fire road to a sloppy climb. Due to earlier races, the mud was deep and soft - the kind that will take your shoe right off! My strategy up the first climb was to follow and keep up with a fast runner and use their footprints as plant points. This would, for the most part, help me avoid sinking. Good strategy - still almost lost a shoe four times.

Mile 2 was, as promised, the toughest and slowest mile of my race, with a 10:58/mi pace. Pace was not an issue for me. In trail runs and races, my goal is to come out safely and let pace take on a life of its own. The slow pace of mile two would prove to be a great contribution toward my finish. Once mile two was done, I was positive the rest of the race would be at least, easier than mile two.

Through trails and campsites and winding through the park, terrain was varied and the focus was safety. Throughout the race, I tried to stay behind runners and use their footing as safe spots. Two times I had a runner wipeout in front of me. Once I made sure they were okay, I continued on. Luckily, I stayed upright and avoided falls. 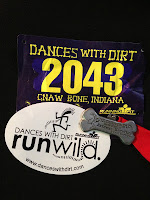 One of the best parts of the race, besides the challenge of mile two, was the last mile. Running downhill through long grass, I felt separated from others running the half, while passing some 10K'ers. Once down the hill, all the mud was washed of while running through a few creeks. The day was cool and the water was cold. At one point, the stream was nearly waist deep and I thought about swimming! After tackling that obstacle, I emerged from the water, legs numb, and hit the last quarter mile hard! Crossing the finish line was awesome, especially when seeing my time. Here are my official results:

This, my third trail half marathon, was an awesome race! The course was well-routed and marked,  volunteers and organizers were awesome, and the medals, shirts, and "death waiver" are awesome!  The under two hour time was a great accomplishment for me, along with a first place age group finish. Thanks to DWD for a great event. See you next year!

My race schedule gets no easier:

Thank you for reading, commenting and, as always, HAPPY RUNNING!

James Hoagland
Louisville, KY, United States
I love to run, set goals and work hard to achieve them in all aspects of life.